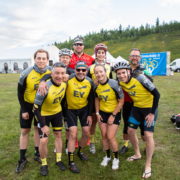 Ernst & Young is one of the Tour’s Northern Lights sponsors, and has been working alongside the Alberta Cancer Foundation for the past eight years to fund local cancer research, care, and treatment. During this time, they have fundraised more than $210K, and are returning for their ninth year to continue to support the cause.

Scott Patrick, Captain of the EY Crankers, is riding alongside his team to raise another $25,000 this year. They will be joining us at the Calgary Polo Club on July 23 and 24, and appreciate that two routes will be available to make the ride accessible to more riders.

Like many participants, the EY Crankers are proud to ride in honour of their loved ones who have been affected by cancer. As Scott explains, “Cancer is always lurking, and we feel the need to do something to take control back from this villain. We don’t want to be afraid. We want to help people who might otherwise not get what they need to survive cancer.”

As a long-time Tour participant who has a love for cycling, Scott has been riding to and from work to prepare for this year’s event, while also integrating different rides into his weekend. His advice for first-time riders is to “Get on your bike five times a week to train your butt to be in a bike saddle, but don’t worry about hitting 100km training rides. The Tour is not a race of any kind and is so much more than a long ride. Enjoy the experience, talk to people at the rest stops and during lunch, and socialize in the evening. Prepare to have fun!”

He’s banked plenty of amazing memories from past Tours, and knows this year will be no different:

“My fellow EY Cranker Brent Cheung and I always look forward to the lady dressed as the clown, cheering us on at the rest stops. She made us smile and laugh every year.

The cheering at the finish line on Sunday is unreal, too. It literally makes you feel refreshed and want to go right over to the Tour table and sign up for the next year. It’s the best weekend of the year. I can’t remember a more meaningful or better spent 48 hours than those on the Tour.”

Thank you to Scott and all of the EY Crankers for your continuous support and contributions.

Interested in sharing why you Tour with our community? 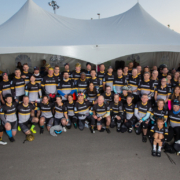 As the Tour’s title partner, Enbridge is dedicated to bringing more moments to Albertans facing cancer. Over the past 14 years, they have raised more than $6.3 million to fund world-class care and research.

A part of Team Enbridge, Max Chan and Ben Tsui are two of our top fundraisers for 2022. With the help of their team, they have set out to raise another $300,000 this year—a goal they quickly surpassed.

On July 23 and 24, Max Chan plans to mountain bike 100km as a virtual participant.

Max originally became involved with the Enbridge Tour Alberta for Cancer five years ago, when he joined as a volunteer. This will be his second year participating in the ride, which he considers “a celebration of the progress we have made towards battling cancer and more personally, another opportunity for me to celebrate beating cancer.”

In 2020, Max was diagnosed with kidney cancer, which he has thankfully recovered from. Although he volunteered his time to the cause years previously, the last two Tours have taken on a personal significance for Max, and driven him to push his fundraising potential even further.

He took to his own route last year, and with a friend by his side, pedaled to the top of Panorama, a picturesque terrain located in the Purcell Mountains of southeastern British Columbia. He has prepared for 2022’s Tour by consistently training and maintaining a keen focus on his fundraising efforts.

Ben Tsui will be joining us in-person at the Calgary Polo Club, and cycling 200km on July 23 and 24.

Like Max, Ben first became involved with the Tour as a volunteer. He was an avid mountain biker at the time, but a year later, bought his first road bike and has ridden in every event since.

In 2014, Ben noticed a lump near his jaw while shaving. He was diagnosed with a cancerous parotid tumor, which was surgically removed. “I’m in a place now to share my story,” he says. “I hope that it helps others not only seek help but get treatment–I consider myself a poster boy for early detection.” His experience motivated him to fundraise to beat cancer, however, he also rides for his mother who is currently undergoing chemotherapy, his mother-in-law who is a survivor, and his friends and colleagues who face this disease.

Due to the pandemic, Ben took his own route last year as well. He rode alongside his teammates through the Bow Valley Parkway between Banff and Lake Louise and explains that “the friendship was as spectacular as the views. I only expect the [camaraderie I experienced] to be dialed up this year [at the in-person event] as we tackle new roads with other teams.”

Being a year-round cyclist, he prepared for 2022’s Tour by adding more structure to his training regimen in the winter months. He looks forward to the positive energy and emotion that will be present on July 23 and 24, and seeing all the friendly faces that will come out to show their support.

Max and Ben’s advice for riders taking on the challenge for the first time:

“Everyone has their own personal reasons for why this is important to you. Don’t lose sight of that. It’s not just about the distance, but raising awareness and funds for this important cause.”

“Dress right, fuel right. But ultimately, there is no substitute for ‘seat time.’ Get your rear end used to spending time in the saddle.”

Thank you to Max, Ben, and all of Team Enbridge for your continuous support and contributions.

Interested in sharing why you Tour with our community?